The new installation of Ken Unsworth’s ‘Suspended stone circle II’ brings layered possibilities with every angle: from above and below, find textures of river rock and twisted wire; follow lines of light and tension.

Hold the weight of the stones in your mind, then release them back to their floating forcefield. Get lost in the thickets of wire – imagine yourself tied, bound on every side in perfect stillness – then let your gaze drop to swim through the pools of shadow underneath. 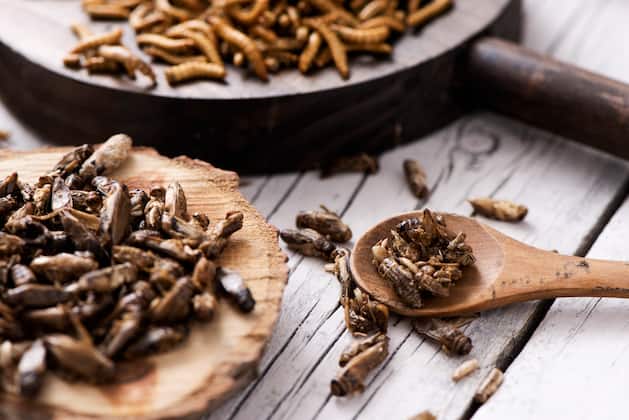 END_OF_DOCUMENT_TOKEN_TO_BE_REPLACED

Thanks to Konrad for finding that text and producing some pictures

Before Marcel Proust went into raptures over his petites madeleines he was waxing lyrical over a rusk-like biscuit and before that a piece of stale bread. The “episode of the madeleines” as it became known, is one of the most celebrated events in his seminal work À la Recherche du Temps Perdu (In Search of Lost Time), encapsulating its theme of involuntary memory.

Over the space of two years, however, the passage started with a very different flavour as the French author wrote various versions of his childhood recollection.

In 1907 when he was working on the first volume, Swann’s Way, it was the dunking of pain rassis, a piece of stale bread, into tea that provoked his elation. In the next version, it had become pain grillé, or toast, then some time around 1908 it was a biscotte, a kind of hard biscuit.

The rest, of course, is literary history.

In the end, Proust settled on “those short, plump little cakes … which look as though they had been moulded in the fluted scallop of a pilgrim’s shell” to evoke the crumbs dipped in lime-flower tea his Aunt Léonie would feed him as a boy.

A new exhibition to mark the 100th anniversary of the writer’s death opens in Paris and traces the meticulous process through which Proust produced his monumental seven-volume novel – the first tome of which appeared in 1913 and the last in 1937.

On display are almost 350 items; including never-before-seen documents, manuscripts, photographs, paintings, objects and costumes tracing and illustrating Proust’s creative process at the time he was writing from the late 19th century until his death in 1922.

Proust preferred to write with a fountain pen in bed, which was just as well as he was frequently ailing and spent the last three years of his life mostly confined to his bedroom, where he slept during the day and worked at night.

Among the most extraordinary exhibits at the François Mitterrand Library – part of the French National Library – are the many notebooks he filled with fluid and almost illegible cursive writing; the rough drafts on loose sheets of yellowing lined paper torn from those same books and the dozens of pages of handwritten and typed manuscripts, as well as publisher’s proof editions filled with editing marks, annotations and revisions.

They reveal a writer who was pedantic and a perfectionist; a tireless editor and reviser of his own work who would toil over a single word, whole sentences and even entire pages struck through with edits scrawled in the top, bottom and side margins. In a pre-computer version of cut-and-paste, Proust would physically cut out large passages of handwritten or typed text and glue them elsewhere.

Even the first sentence of the first volume, Swann’s Way, that has become one of the most instantly recognisable novel openings: Longtemps, je me suis couché de bonne heure (For a long time, I went to bed early) was written, mulled over, crossed out, then reinstated.

Nathalie Mauriac, one of the exhibition curators, said it had been “very complicated” to follow the order of Proust’s writing. “He wrote the first and last volume at almost the same time and made multiple changes in the organisation of the work,” she said.

“There is something disproportionate in the scope of Proust’s work, as evidenced by the very materiality of his manuscripts, starting with the famous paperoles (paper drafts), those accordions of fragments of paper folded and pasted into his notebooks.”

She said the huge number of corrected and changed manuscripts, and proofs were “very Proust” and were evidence of “the enormous amount of work he put into each book… and the evolution of each”.

In Search of Lost Time is a fictional autobiography in which Proust mirrors his own life, recounting it as a young boy and as an older man recalling his youth. A central theme is the role of memory and the notion that experiences are not lost but remain in the unconscious. The seven volumes eventually ran to more than 3,200 pages and featured more than 2,000 different characters, but the first was refused by several publishers forcing Proust to publish it at his own expense with Grasset. The work is frequently listed among the greatest books of all time.

“Proust was the greatest novelist of the 20th century, just as Tolstoy was in the 19th,” wrote the English novelist Graham Greene.

To the delight of literary historians, Proust kept most of his manuscripts. He was working on and revising the last three tomes of the novel the night before his death on the 18 November 1922, when he died of pneumonia and a pulmonary abscess, aged 50. His work and documents passed to his brother Robert, who ensured the posthumous publication of the three books – and in 1962 Robert’s daughter Suzy Mante-Proust handed all the documents to France’s National Library.

Proust is buried at the Père Lachaise cemetery in Paris.

Konrad using the AI-Program DALL-E produced some pictures for the topic Proust and his (no)madeleine… Actually you can say, the program knows exactly what madeleine is (a woman AND a cake) but is ignorant in the question, who is Proust (a man AND a writer). Anyway a wonder!