This year’s Valentine Day coincides with Ash Wednesday – what a contradiction.
Let me share with you a memory of a very strange Valentine Day.

At the beginning of February 1999 I flew from hot summer in Melbourne, Australia, to cold and wintry Minneapolis. My intention was to compete in a ski marathon – American Vasaloppet in Mora, Minnesota.
The winter was poor in snow, but I managed to have decent skiing in few parks in Minneapolis. On Thursday evening, 3 days before the race, I heard on the radio, that the race has been cancelled due to the lack of snow.

It was a shock! Next morning I rang the race office. They confirmed the bad news – sorry, the race is cancelled.
– That’s impossible! I came here all the way from Australia! It cannot be!
– We are very sorry, but it is cancelled.
– But there is quite good snow in parks in Minneapolis.
– We also have good snow in the forest. But the race is run in the open area and there is no snow there.
– So shift it to the forest!
– That’s impossible, we have around 4,000 participants, we cannot squeeze them on narrow tracks. Anyway, the decision is FINAL, there is NO RACE!

I tried the last chance – please connect me with the club secretary.
I had Valerie Brown on the other end of the wire and I laid down my proposal:
I understand that you are unable to run the regular race. But on the other hand there is still quite good snow in the forest. And on another hand, I came here all the long way from Australia. Why not to put these two hands together and let me do a solo race in the forest?
There was a moment of silence and then… – come to Mora, we’ll see what we can do for you.
I heard smile in Valerie’s Brown voice. 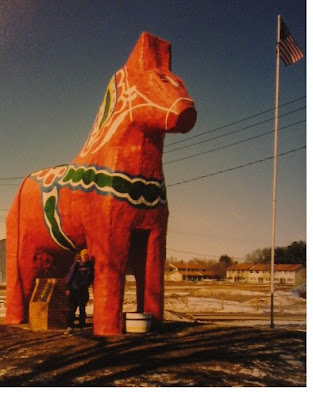 I came to Mora on Saturday morning. It was sunny, cold and snowless. The big, red Dalarna Horse reminded me my race in Sweden 3 years earlier.

In states Minnesota and Wisconsin there is quite large Scandinavian population, no wonder they introduced cross country skiing and copied traditional ski races of their countries.

Vasaloppet is most famous of them. It commemorates a historical event from year 1521. At that time Sweden was under Danish occupation and Swedish nobility assembled in a little town Mora decided to organize an uprising to liberate their country. As a leader they chose certain Gustav Vasa. He was hiding from Danes close to Norwegian border. Messengers were sent to him to convey the message. Gustav fastened his skis and skied 90 km from Sälen to Mora.

The uprising was a success, Gustav Vasa was elected a king and established a Vasa dynasty.
In year 1922 a ski race has been organized on the historical course – Sälen to Mora – 90 km – CLICK.

I went directly to the race office. It was the saddest place in the world. Thousands of race bags and bunches of medals for finishers. I took one of them in my hand…. 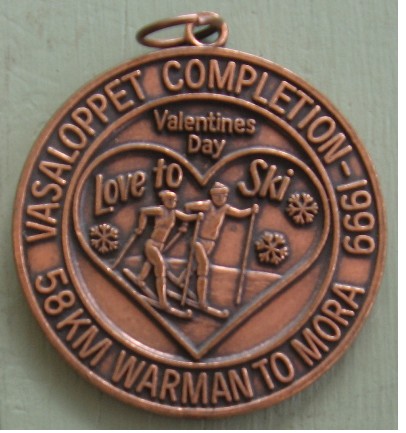 We studied maps of ski trails in the forest. Valerie showed me the ones where the snow should be OK. I did simple arithmetic.
– Valerie, so if I will ski around these loops until 1 clock over 58 km, will you give me such a medal?
– Find his racing bag – she said.

A couple of club members drove me to the forest to see how it looks. I found it in much better condition than expected. After return to the town, I still managed to participate in sled races with some locals of Swedish origin and eventually went to sleep as the happiest person in Mora.

9 o’clock Sunday morning, blue skies, light frost, no wind. In the Log Cabin I left a bag with warm clothes and some food and drinks. I put on my red racing suit with kangaroos on the back and on the leg. Race number 503, START!!!

For a long time I was the only person on the trails. Later some people arrived, whole families for a relaxing session of skiing in the sun. Some of them were quite shocked when out of sudden a crazy racer appeared…
– Go away from the track – shouted parents to the children – thousand skiers will be here in a moment!
– But they said , that the race is cancelled?
I left them in such puzzled state and skied on and on – 5 times around The Point Trail, 4 times Beaver Dam Trail and every possible trail between and around.

Eventually my log showed more than 60 km, it was almost 3 pm. I skied back to the Log Cabin where some club members waited for me with the medal of my dreams.

Back from home, I wrote a detailed report of my effort, it showed almost 65 km. What a surprise it was when few weeks later I received mail from Valerie Brown. She sent me a special diploma.

…and another medal. Valerie explained, that some of “Love to Ski” medals have been given to sponsors and volunteers so for me she sent a special one – Winners’s Time + 50%, Year 1999.

And there is only ONE such medal in the world.