First days of January 1960.
I just returned from Christmas holidays to student dormitory in Warsaw. For a while I was alone in 4-persons room. I looked into freshly bought monthly magazine Radar.

Radar, magazine for youth, it tried to introduce some new trends in Polish People’s Republic’s press.
One of such novelties was a Pen-Pal Club. Radar published each month addresses of young people from other countries who would like to exchange letters with young people in Poland.
Strangely, majority of these people were from Western Europe, mostly Sweden and Finland, mostly females.

But on this day I noted a girl from Germany, West Germany – Inge from Frankfurt am Main.
I wrote a letter in English and few weeks later received an answer – letter with a postcard – Frankfurt Rathaus. 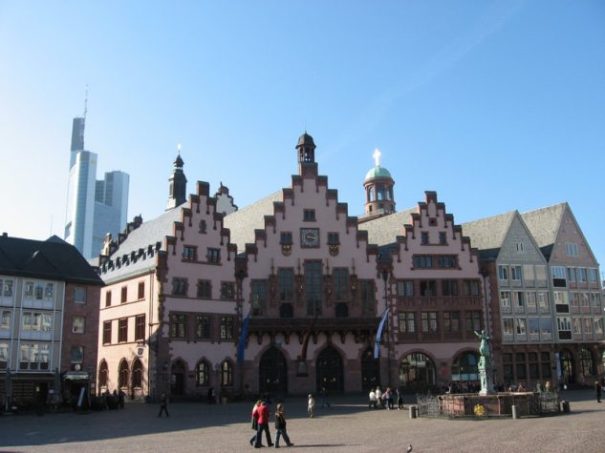 I already had some bad experience with such correspondence – first few letters were the introduction of pen-pals, then… a trouble – what to write about?

First letter from Inge gave some hope, she was very interested in classical music, she studied singing at Frankfurt Musikakademie.

Music. For me it was connected to Germany, German language.
In high school we had in curriculum 3 foreign languages – Russian and in my case – German and English.

In all 3 cases we had exceptionally good language teachers.
German teacher, Mr Miętus, always immaculately shaved and dressed.
After entering the class he greeted students and started the lesson with the same phrase: gentlemen, take out your preparation, please.
Preparations meant our exercise books.

He put a lot of effort in teaching us German poems – J.W. Goethe, F. Schiller.
I think we learned them with pleasure and this caused a trouble.
On a day when learning the poem was due, he called few student to recite it and when the result was satisfactory, he proposed: maybe the whole class would recite it together.
For the first few lines it went smoothly, Mr Miętus, with delightful smile on his face, recited with us and marked pace with his hand, like an orchestra conductor.
Then, some students started to accelerate the pace, other shouted loudly only some words, other just shouted or made some strange sounds.
– Stop! Stop it! – shouted the teacher with tears in his eyes, but the class went on like a steam train..
Finally we ran out of steam, there was silence in the class. Mr Miętus sat at the table totally devastated. I think most of us felt sorry for him.
Still, after few weeks, he could not resist a temptation, and we turned it again into a disaster.

This passion for directing a collective recitation covered his real passion – music.
At that time I was already enchanted by the classical music, but the only source of it was a loudspeaker in our flat transmitting Program 1 of Polish radio.
Mr Miętus introduced me to live music performed in a very modest concert hall in provincial town – Kielce. He also was very keen to talk about music, about composers.
For the most of the class it was time to relax. For me it was more interesting than the German lesson. No wonder quite often my colleagues asked me to start some music discussion with the teacher, they had at least 20 minutes of rest.

Anyway, music stayed with me for the rest of my life. In the meantime it helped me to keep in touch with Inge. Other subject was – books. It looked, she was quite sensitive on human misery and found some answers in Charles Dickens books.
I have to admit that for me an important motivation for this correspondence was practice of English.

So passed 3 years and some new German accent arrived – student excursion to Austria.
There were some 20 participants, we traveled on a group passport.
Great excitement – visit to the country behind an “Iron Curtain”.

First was Czechoslovakia.
Meticulous control on two borders. Controllers crawled under the train, rolled mirrors under passenger seats.
On the border station between Czechoslovakia and Austria I noticed few men in strange uniforms entering our carriage.
When, eventually, our train moved and crossed the border, they pinned some emblems on their uniforms and greeted us: welcome to free Austria.

Atmosphere in our compartment relaxed. Some people revealed US dollars hidden in some clever places. It looked as I was the only one who did not smuggle anything.
Another revelation was an address of a shop in Vienna run by a Polish migrant: Mr Szumilas, Wipplinger Str. 11.

On arrival in Vienna we were greeted by our Austrian guides, they were members of a program of reconciliation run by some religious association.
They paid us our allowance for 2 weeks stay in Austria – some 280 Austrian Schillings. Exchange rate was about 24 Schillings per 1 US dollar.
With my knowledge of English and also limited German my help was frequently needed.

We spent one week in Vienna visiting most popular tourist venues: Hofburg, St Stephan Cathedral, Schonbrunn Palace and also a Soviet War Memorial – CLICK.
Note: from 1945 till 1955 Austria was occupied by Soviet Union, US, Great Britain and France.

In free time we visited a shop at 11 Wipplinger Str.
Shop attendant greeted us cordially: welcome to Polish working class.
– This is already communist bourgeoisie – corrected her Mr Szumilas.
I bought some novelty – non-iron shirt.

Our accommodation was in Student home at Pfeilgasse. We got our breakfast and supper there. Just sandwiches. Dinner we had in Mensa House in early afternoon.
I remember it so well as it was my first taste of Coca Cola.
Coca Cola, somehow for me was a symbol of rotten West. No wonder I drank it with some concern – will it make me dizzy or maybe there will be other side-effects?
There were none. Much later I read somewhere that it tastes like ping-pong balls. Absolutely right.

After one week in Vienna we traveled to Salzburg where we stayed in old US Army barracks near the airport.
Visit was dominated with W.A. Mozart memories.

Then to the mountains – Zell am See.
At one point our bus driver announced that we will be crossing to West Germany.
Our Polish tour guide protested – we haven’t got German visa!
– What a nonsense – commented the driver – everybody travels this way. This is the shortest route.
Our Austrian guides exchanged smiles – there is a strict control on the borders between friendly Communist countries – they explained to the driver.
Few minutes later Grenzpolizei sent us back to the longer route. Doubtful satisfaction.

Zell am See – CLICK – a mountain wonderland.
We visited Kaprun, Kitzsteinhorn Glacier, had a mountain walk.

On the last day we had an easy stroll around the lake.
Someone asked about the date – First of September.
And at that moment I realized that people around me speak German.
Somehow I felt that on this date I was in an improper place.

Finally back to Vienna and a nice surprise – a concert, Beethoven’s VII Symphony. I never heard it before, just listen to the II part, Allegretto – CLICK.