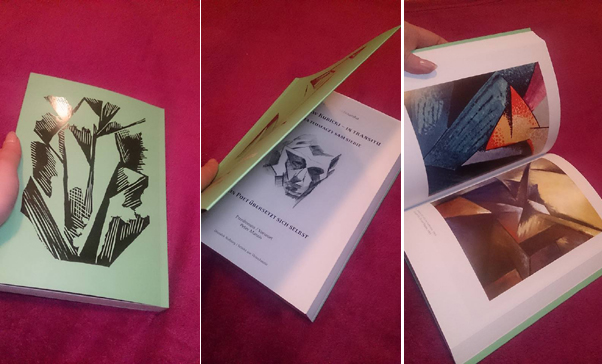 The international touring exhibition Bunt – Expressionism – Transborder Avant-Garde. Works from the Berlin Collection of Prof. Stanisław Karol Kubicki is coming in two days an end.
The exhibition finale will be a combination of the premiere of the documentary-artistic film Bunt. Re-Vision and the presentation of a book concurrent to the exhibition written by the exhibition’s curator Dr. Lidia Głuchowska.
The exhibition finale: Saturday, 12 December 2015 at 16.00 in the Lower Silesian Center of Photography “Roman House” in Wrocław.

Stanisław Kubicki who had roots in Poland and Germany not only created poetry in two languages but also expressed himself in two artistic media – visual arts and literature. He was equally engaged in popularizing aesthetic innovation as he was in the socio-political changes of his time, proving his patriotism and fascination with the avant-garde utopia of the new community. In her search for the essence of this trans-border phenomenon, Lidia Głuchowska, in her book provides an insight into the crucial chapter of the history of Polish culture, German studies on Polish literature and art history, by referring to the achievements of such renowned researchers of expressionism as Paul Raabe, Eberhard Roters and Heinrich Kunstmann.

By focusing on Kubicki’s romantic Polish patriotism and simultaneously on his avant-garde internationalism, Lidia Głuchowska, uses comparative – art historical and philological – methodology and provides an incisive approach and enlightening results. Her sensitivity to the pregnant relationship between the author’s own German and Polish versions of the same poems and their role in both transmedial artistic and political activities enables Głuchowska to analyze productively the differences and parallels between Kubicki’s German and Polish verses. By embracing this original method – from which the title of “in transitu” derives – she is able to penetrate the deepest meanings of the writer’s intentions. The result of the author’s heroic endeavor is to restore the fullness to Stanisław Kubicki’s life in art and to show that the dilemma of his national or supranational self-awareness was typical of many artists of the ‘new states’ in Central Eastern Europe after WW1.

Steven Mansbach, Professor of the History of Twentieth-century Art University of Maryland, USA

Stanisław Kubicki – the author of manifestos and posters of the Poznań group Bunt (1918 – 1922) – initiated the group’s contacts with the international avant-garde in Berlin. For a long time now he’s been valued as the author of expressionist and cubo-constructivist drawings and paintings which were created with extraordinary formal discipline. It turns out however that in the culminating phase of his achievements he also wrote interesting program poems and did so in Polish and German at the same time. Only a comparative analysis of the two areas of Kubicki’s creative activities facilitates a full unveiling of its originality. That is the subject of an insightful monograph by Lidia Głuchowska who thanks to her competency in literary studies and art history, critically researches many archival sources unknown up till now and also documents the artist’s active participation in the Polish resistance movement and the circumstances of his tragic death at the hands of Gestapo.

The book Stanisław Kubicki – In transitu – The poet translates himself is not only a solid publication in terms of content but a widely commented and beautiful edition containing program manifestos and expressionist poetry in two languages by the radical leader of the Bunt group Stanisław Kubicki. The works created between 1918 and 1921 reflect the dilemmas of many representatives of the classic avant-garde not only in Poland but also in the other “new countries” of Central Eastern Europe.
Part of them were printed in that stormy period as a kind of artistic intervention to the sudden socio-political changes of the end of the first world war and at the beginning of the new, post-war order. At that time they were simultaneously published in Poland and in Germany in Zdrój magazine, Die Aktion, Der Weg and Die Bücherkiste and in the almanac Faded Dawn of the Epoch. Fighting for the New Art 1917 – 1921 [Zagasły brzask epoki. W walce o nową sztukę 1917–1921], however the majority of them were found only recently and they were reconstructed as a bilingual collection by the author of that publication.
The poetic-program works of Kubicki in the book are a worldwide curiosity: the artist wrote them originally in two languages breaking the particularity of the literary message and thus created a peculiar manifesto of avant-garde internationalism.

The versed expressionist manifestos by Kubicki correspond to his drawings that he created simultaneously and paintings similar in themes and universal in expression due to the international – by its nature – artistic language. Together they are a representative example of the explosive synergy of word and image, intensifying the program message in magazines and ethereal printed materials of the avant-garde.
The frame for the poems is a monographic commentary on the interdisciplinary oeuvre by Kubicki which is polemical in comparison with the traditional and stereotypical opinion of his achievements. The book’s introduction defines his poetry and artistic and political activity as an expression of ambivalent self-awareness – in transitu –that is a typical avant-garde multiple identity, stretched between the belief in a trans-national utopia of the new man, the new community and romantic patriotism.
That romantic patriotism was expressed in the unparalleled sacrifice of Kubicki. As the National Army’s courier to the embassies of neutral countries in Berlin he died at the hands of Gestapo.

The presentation of the artistic and literary oeuvre included in the five essays goes beyond the revision of Kubicki’s place in the national and universal history of literature and art. It is also an insightful, stylistic and subject-matter-oriented interpretation of the aesthetic artifacts because it unveils the little known behind-the-scenes activity of Kubicki and his colleagues from Bunt in international artistic circles.
The author provides a critical contextualization of the myth and reality of revolution in Kubicki’s works, there’s therefore an echo of his alleged participation in the Spartacus uprising in Germany which the author describes by referring to the theory of the grotesque. Moreover, by delving into the archival source materials the author documents Kubicki’s involvement in the Polish resistance during the second world war. The Preface by Peter Mantis enables understanding the relationships between the artistic (auto)creation of Kubicki and his tragic biography.
The publication concludes with an annex pertaining to the drawings by the Bunt group from the heritage left by the artist and his wife – poet, painter and graphic artist Margarete Kubicka – donated to the National Museum in Poznań and the Leon Wyczółkowski District Museum in Bydgoszcz as well as the exhibition to honor this generous gift.

The book Stanisław Kubicki – In transitu – The poet translates himself captivates with its elaborate artwork by the frequently awarded designer Monika Aleksandrowicz. Most of all, she managed to excellently elicit the innovativeness of Kubicki’s art works, their unique discipline and their internal rhythm. Many of the over seventy black and white reproductions are shown here for the first time

1 thought on “Stanisław Kubicki – In transitu”